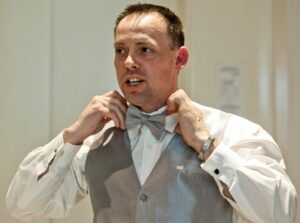 My Story of Recovery

My name is Randy Anderson and I’m a person living in long term recovery. What that means to me is I haven’t had to use any drugs, alcohol or mood-altering substance since January 9th 2005. Because of my recovery I’m able to be a husband, a son, an uncle, a brother. I’m able to own a home, vote, have a job that I love, and even pay taxes. Today I’m able to live life on life’s terms and be present every moment of every day in my own life.

My “rock bottom” occurred in 2004 when my home was raided by a DEA drug task force and I was arrested for selling drugs to support a drug habit that had become so enormous and all-consuming, selling drugs was the only option I felt I had left. After spending a short time in jail, I was offered a lifesaving procedure for my disease and that procedure was affordable, effective treatment for my substance use disorder.

After taking nearly 10 months to complete a 60-day treatment program and finding a life of recovery, I had to face the consequences for my criminal activity. Nothing could prepare me for what would happen next. On July 6, 2005, I would be sentenced to 87 months in federal prison. As a first-time non-violent drug user who was now on the path of recovery, I never imagined such a lengthy prison term would be given to me, even though my attorney continually warned me that I was looking at a multiple year sentence. Even if I had not yet found recovery, more time in treatment is what I would have needed, not prison. I can’t believe our country incarcerates someone for so long with no consideration for the positive changes made in one’s life. I couldn’t help but ask myself, “Why me? I didn’t burglarize anyone, I didn’t assault or kill anyone, I didn’t steal from any person or businesses to support my habit and I was even paying my taxes.” On August 17, 2005, the worst day of my life, two of my dear friends drove me to Waseca Minnesota so I could self-surrendered to federal prison and begin serving my prison term.

I did serve out my time and was eventually released in 2009. I maintained my recovery throughout my incarceration because I truly believed my life would be better without the use of any mind- or mood-altering substances. Upon release, like many that get out of prison, I was required to be supervised, for me that was to be a period of 48 months. Because I decided long ago to do whatever it takes to get my life back, I did absolutely everything that was required of me and because of that I was released after only 20 months of supervision.

By this time, I was working full time as a home improvement sales person. I did that for a few years and then, after becoming unemployed, I decided maybe it was time for a career change. With great trepidation and the GED I earned in federal prison, I enrolled in college at 43 years old, with the encouragement and support of my brilliant wife. I often refer to my first day of college as the second scariest day of my life, with the first being self-surrendering to federal prison. I enrolled in college to become an addiction counselor; something that was a dream of mine since receiving the gift of recovery.

Through the journey of college and becoming an addiction counselor, I found so many causes that I felt compelled to become involved with. One that I’m most proud of is, being appointed to the board of directors for the Minnesota Second Chance Coalition. Since being involved with the Minnesota Second Chance Coalition I was given the opportunity to testify during the 2015/2016 legislative session in front of several legislative committees during the drug sentencing reform hearings. Because of my testimony - and that of others - MN had the most significant change in drug sentencing in nearly three decades. I’m grateful to know because of those sentencing guideline changes, approximately 700 less people will be incarcerated yearly because they have the disease of addiction. There are many more details to the drug sentencing reform that I could probably write two more pages, those changes took effect August 1st 2016. Another major achievement that I’m extremely proud of was being ask to sit on the board of directors for the Steve Rummler Hope Network (SRHN). Working with SRHN provided me countless opportunities to tell my story of recovery. I also train and educate individuals, family members, law enforcement and EMS/EMT first responders about the life saving medication naloxone, the medication to reverse an opioid overdose. I’m also a volunteer for serval organizations including the Recovery Advocacy Project, Minnesota Recovery Connection (MRC), Fed Up Coalition, Hennepin County Sheriff’s Office and the Minnesota Association of Resources for Recovery and Chemical Health (MARRCH). I did complete college and receive my Associates of Science degree in addiction counseling and a Bachelor’s degree in human services. I had the privilege to work for more than two years as an alcohol and drug counselor at the very same facility where I found recovery over 15 years ago. In March 2019 I decided to follow my passion and venture out on my own and started Bold North Recovery and Consulting. Bold North Recovery and Consulting was founded on the idea that services should be available when people need them. To truly meet the individual where they are means meeting them during the window of opportunity which isn't always 9 to 5 - Monday through Friday.

I never imagined the life I live today would ever be possible. I often ask myself when will I wake up from this dream? Well, the fact is this is no dream - it’s the life that I live and it’s only possible because of my recovery.

I saw the movie “The Equalizer” with Denzel Washington at the beginning of that movie it displayed a quote which I connected with and will forever hold close to my heart. “The two most important days in your life are the day you are born and the day you find out why.” - Mark Twain. Now I know why!

Back to the  Dedication Page