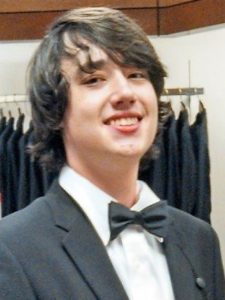 Chris was a beautiful person inside and out and is remembered as the best son and friend one could have. He traveled the world with his family and was fond of cars and writing rap songs.  He knew his cars very well and was creative rap poet. While in high school Chris participated in football, baseball and basketball. He wore his Eden Prairie uniform with pride around the world when we traveled. On the other hand, Chris had challenging life. He touched so many with his big heart and sense of humor in such a short period. His life got cut short after he just turned 21.

Chris Wivholm Memorial Scholarship will be awarded to an Eden Prairie Senior student who:

1. Perservered and graduated in spite of struggle with personal issues or illness including mental health and Substance Use Disorder.

2. Will pursue post-secondary education in the field they choose.

Amount awarded $1000 annually. Each year a new recipient will be chosen and awarded a one time $1,000 scholarship.

Chris Wivholm Memorial Scholarship will be awarded to a graduate student of Eden Prairie High School in May 2021 at EPHS Performing Arts Center. Applications are due by 3:00 p.m. on February 7, 2021.