Relapse rates to opioid use remain high despite use of existing interventions using medication and/or behavioral treatment. This is particularly troubling in opioid abuse, as diminished tolerance to opioids can lead to higher potential for overdose-related fatalities. Opioid exposure, in some individuals, can produce lasting changes in the structure and function of the brain. That addiction is so difficult to treat probably reflects the extensive neuroplastic changes that have occurred that create and maintain the pathological addiction state.  Existing treatments may not be sufficiently powerful to overcome the mechanisms maintaining this pathological state. Moving the system out of the pathological addiction state will require a major perturbation to alter the myriad of systems maintaining the pathological state.

Researchers at the University of Minnesota have made strides in identifying and ameliorating the pathological brain states associated with addiction in humans and in non-human animal models. For example, with tools made available through MnDRIVE Brain Conditions, we identified connections between the prefrontal cortex and nucleus accumbens that were abnormally strengthened in opioid-exposed mice. Using advanced neural stimulation techniques, we weakened these connections and disrupted relapse-like behavior. Furthermore, in patients with alcohol use disorder, in a small pilot randomized controlled trial, we used non-invasive neuromodulation with cognitive training to modify a similar brain connection, based on fMRI data from this patient population. While those receiving the inactive treatment relapsed after an average of 19 days, those receiving the active treatment relapsed after an average of 110 days--a major improvement in outcome.

Given the severe and growing problems with opioid abuse and the limited effectiveness of current treatments, we propose to expand our research along the lines described above to disrupt opioid relapse. The University of Minnesota has the broad range of research expertise and technology available to accomplish this. While use of a neuromodulation (i.e. brain stimulation) treatment for cocaine addiction has shown promise in studies from researchers at the National Institute on Drug Abuse, to our knowledge no parallel path for opioid abuse has yet been taken. The University of Minnesota has an opportunity to be a leader in this important and timely area of medical research.

Problems contributing to opioid use disorder and opioid-related fatalities are obviously nuanced and complex. Thus, even when only considering these from a medical standpoint, it is likely that a range of treatments and systematic improvements in health care delivery will be needed to truly address these problems. Given the breadth of expertise at the University, we are tackling these issues as well. Examples include the development of novel non-addictive pain treatments, vaccines that prevent opioids from reaching the brain, and the establishment of multi-modal treatment facilities that target teen opioid abusers before the often-devastating effects of addiction can fully take hold. We envision that advancements in all of these areas, interacting with one another in useful ways, have the possibility to be phased in within the next several years.

Department of Neuroscience University of Minnesota

“We want to emphasize that addiction is not a failure of moral character or will. It’s a serious and chronic brain-based medical condition in need of much better treatments. Addiction and relapse result from changes to neural circuits through repeated exposure to drugs in some people. The Center will enable researchers and scientist-clinicians to better understand how the circuits that control emotions, motivation and decision-making are altered by addiction and recovery. This is essential to finding new, more effective therapies,” said Mark J. Thomas, a professor and director of the Medical Discovery Team on Addiction in the Medical School, who is leading the Center.

Chris Wivholm Foundation made donation to the Addiction Research 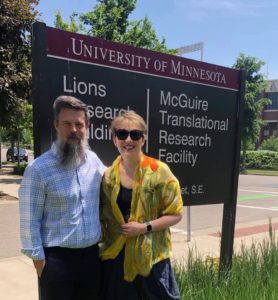 As a result of our dinner, silent auction and fundraising events in May we were able to donate $7,000 to University of Minnesota Neuroscience Department - Medical Discovery Team. Thank you so much to our supporters! We are saving lives by contributing to research.

The Chris Wivholm Foundation made our first donation of $3,000 to University of Minnesota Neuroscience Science Department Addiction Research. Thank you for our donors and supporters!

We are saving lives contributing to this noble cause. Let’s light a virtual candle for everyone that died of this horrific epidemic and everyone, who is still struggling.

Thank you from the bottom of our hearts!

We are raising money for a great cause to support University of Minnesota Medical Discovery Team—2018 Strategy to Develop New Therapies for Opioid-Use Disorder.