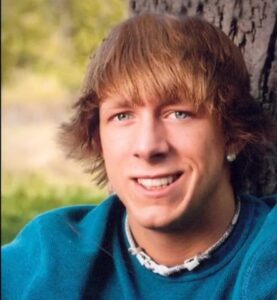 Jake was born February 28, 1992. When John and Sheri brought him home from the hospital on that frosty winter day, there was a big, beautiful rainbow across the sky. Sheri told Jake that rainbow was just for him and that it meant he was truly something special. Turns out, she was right. As a baby, he had a sweet gentleness about him that made him so easy to love. Within a year or two, he developed a strong attachment to his bottle and was the biggest Barney fan there was. If he could’ve been a roadie on the Barney World Tour, he totally would’ve. If you really think back, you can almost hear his husky little voice saying ‘scoot it oba, groba’ and by the time he was three, his name was ‘Jake the Snake.’

As he started school, it was clear that most things came pretty easy for Jake. He began to shine as an athlete and as a student. Teachers loved him and so did his coaches. He was an excellent football player and developed a real love for basketball. As he graduated from St. Francis High School, it seemed as if the possibilities were endless for the fantastic life this kid could have. Another thing about Jake is that he loved to hunt and fish with his dad. They have so many memories of fun times up north together and had lots of traditions. Trips they took every year. Every deer season, Jake seemed to be the first one to get a deer. Like he had some kind of lucky ‘hunter horseshoe’ in his pocket. He said he didn’t pass on anything because he didn’t want to risk not getting one.

Jake also loved to shop. He definitely had a certain style that was only his and he liked to dress up. And if we’re going to talk about his style, we have to mention his hair. To say Jake was particular about his hair is an understatement. He would go to great lengths to get it ‘just right.’ Something else interesting you may or may not know about Jake is that he also was a knitter. No one is really sure where that hobby came from. His brother, Josh, said he’d make fun of him the whole time he did it, but Jake didn’t care. He just kept knitting and would throw the completed hat at him when he was done. They had hats and scarves laying all over the house. And he’d choose the craziest color combos he could think of.

Jake had plans for his life. He had already completed two years of college and just before he passed away he had been accepted to the Minneapolis Community and Technical College to work on a degree in computer software and graphic design. He was so extremely smart he could’ve been anything. Jake wanted to get married some day and have kids of his own. He would’ve been a great dad – little kids loved him.

The last 9 months of Jake’s life were a struggle. In August, we were shocked to learn of his addiction to heroin. It didn’t seem possible that someone with so many strengths and gifts could fall victim to such a powerful and evil drug. He had an amazing family and support system. He had many good friends and opportunities. Jake worked hard to beat the addiction through outpatient treatment first and then inpatient treatment.

In May of 2013, just months after we learned of his addiction, Jake lost that fight. Just when we thought he was on the path to recovery and had more than 60 days clean, heroin took him from us. There were no more chances.

Back to the Dedication Page