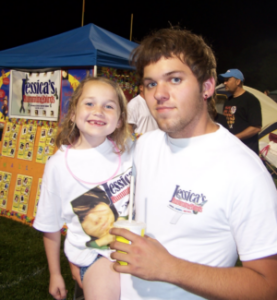 Ben was an outgoing, fun loving, all around great guy. He loved his friends and family we all loved him with all our hearts. Ben was a well rounded kid. He was an elite swimmer, a photographer, mastered the guitar (self-taught), and very smart. He played just about every sport but ended up with a love for swimming. We never saw addiction in Ben's future when he was a child. He was often referred to as the “perfect” child because he would play with kids as easily as he could talk to adults. He took school seriously and was a very easy child to raise. He was a great kid!

At 16 years old he was faced with loosing his close friend to brain cancer. He was with her when she experienced her first grand mal seizure and was on his way to her house one year later when her mother called Ben to tell him his friend had passed away. It was this experience that threw Ben into the depths of depression.

One month after Jessica's death, I took Ben to the dentist to get his wisdom teeth removed. It was August of 2007. The dentist gave him Percocete to relieve the pain. It not only relieved his tooth pain, but also his mental anguish. He was very verbal about how great those pills made him feel. It was instant attraction and addiction took hold. When the pills ran out, he went back to school that year and sought them out from people in his class.

Opiate addiction turned into heroine addiction to finally sobriety after overdosing in his grandmothers basement. Not to my knowledge, Ben was placed on Suboxone by a local doctor. He stayed on this until his insurance was discontinued when he turned 26 years old. Even though he had asked the doctor to start weening him off of it a year prior to stopping, the doctor did not. Ben relapsed within a month of being taken off of Suboxone and spiraled downhill for the next year and a half.

He got clean again in September of 2017. It was the best two months we had with him since prior to drug use. He was happy, doing well, was in recovery programs making sober friends. Everyone, family and friends were so proud of him. He was proud of himself!

On the night of November 13, 2017, no one knows why he decided to huff freon, but he did. It killed him that night. It has left us with mounds of questions and sorrow that will last a lifetime.

Back to Dedication Page